Alive Sharks is a shareware underwater action arcade game where you play a marine biologist who dives for rare ocean creatures.

Your diver swims on his own and you have to lead him in the direction of the creatures. He picks them up and you have to bring them back to your cage to get points. Each of the 10 levels is filled with sharks wanting to kill you. You can stand a few bites but sooner or later you are dead. By touching the poisonous jelly-fish you even die immediately. You can avoid this by shooting them with your gun. You get a point and they sink stunned to the ground but they are not dead and recover quickly. Simply shooting in their direction will frighten them and they lose your tail for a few moments. In higher levels the amount of sharks increase, they get more aggressive and your gun numbs them for a shorter period.

In the shareware version you can only play against sharks. Full version features raybats and killer jellyfish. 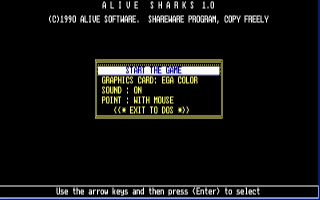