Bert Higgins: The Man From H.E.L.L.

You can play Bert Higgins: The Man From H.E.L.L. on this website so you don't need to download and install the game on your computer. We recommend to use Google Chrome when playing DOS games online.

Bert Higgins is a top-down shooter with a sci-fi and military theme that you could compare to such games as Operation: Carnage, Alien Breed and Project Paradise. It has a rather ambitious design, boasting highly interactive, destructible environment and clever AI opponents, but suffers from design drawbacks, including an unwieldy keyboard-only control scheme.

The background story tells how mankind benefitted from advanced technology that was provided by mysterious aliens who never showed up themselves. But some distrust this gift and form an opposition movement bent on returning to the old ways by any means necessary. Bert is a cyborg created with the use of alien tech who is sent to critical hotspots to restore order, which in practice means shooting a lot of hostiles, human and robotic, while trying to remain in one piece.

Gameplay involves as much exploration as there is combat, and would suit well a first-person game of Doom calibre like HacX. You can strife and run forwards and backwards, aim in eight directions, pick and use various items and keys, open lockers and drawers, destroy things etc. But controls require a lot of getting used to, while enemies are fast, hit hard and are quite numerous.

The scenarios themselves are also mission-based, rather than simply run-and-shoot. You need to rescue NPCs, target specific objectives, and generally plan your way as you progress through the levels.

Bert Higgins was originally sold as shareware, with the free demo only coming with the tutorials and two levels, while the registered game has three campaigns. It would have probably drifted into complete obscurity but a former developer eventually uploaded the entire game as a free download. 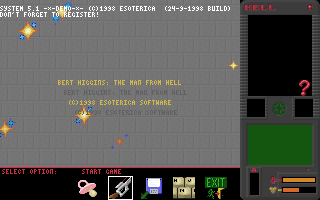