You can play Bubble Blobb II on this website so you don't need to download and install the game on your computer. We recommend to use Google Chrome when playing DOS games online.

This is a much improved sequel to Bubble Blobb, which in turn is a variant of arcade game Crillion - similar to Breakout, but the player controls the bouncing ball directly. Here, your goal is to steer the ball to the exit while breaking up blocks that bar your path, and avoiding various hazards.

Like in the original Bubble Blobb, you can only break bricks of the same colour as the ball itself, and the ball needs to touch special blocks to change colour. The ball bounces up and down freely, and the player only controls its movement by steering it left or right - by default this is accomplished by pressing left and sight Shift keys, respectively. Bubble Blobb II adds more items and hazards like tiles which get periodically zapped by electricity (any ball caught in the arc is lost), or blocks that make the ball rapidly cycle through all colours for a while. Some levels must be completed in a limited time, but taking a detour might yield some valuable items like extra life.

The game was marketed as shareware. 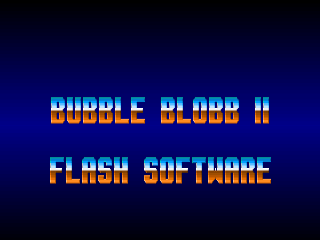