A Shareware Magazine Editor's Choice award winner! Corncob was nominated in two categories as by the Shareware Industry Awards, and has received rave reviews in Computer Gaming World, PC/Games, In Flight, Computer News PC, and Nuts and Volts magazines.

As you hear the scream of KLA homing devices that barely miss your wobbling Corsair aircraft, you know you're in for the fight of your life. You check your altitude gauge, then steel yourself for another run at the enemy. This is just part of the action in Corncob 3D, the best shareware air combat flight simulator ever! With Adlib and Sound Blaster music and pulsating sound effects, you'll be riveted to your seat for hours with this game!

Corncob offers over 20 different missions to achieve your objective of driving the aliens from Earth. It also includes a training mission, heart-racing battles with alien aircraft (and even aliens themselves). Written by a physics graduate student, Corncob 3D is the most realistic air combat game on the market today, retail or shareware. Flight-simulation special effects include stalls, side-slips, upside-down flying, and more.

According to Shareware Update magazine, Corncob's VGA graphics "are most impressive indeed." In addition, Corncob's virtual reality approach "is an incredible effect that must be experienced to fully appreciate." 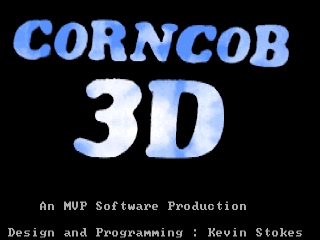