You can play DIMONO on this website so you don't need to download and install the game on your computer. We recommend to use Google Chrome when playing DOS games online.

The game is played with the mouse. Left-clicking selects and places a piece in the desired square, right-click cancels the move. WARNING! Trying to make an illegal move will cost a penalty in points.

The game is entirely in German but there should be no problem playing it even if you do not know the language.

There is a browser version of the game in higher resolution, please see the links section below.

DIMONO is a puzzle game that is played on a 8x8 board. The main objective is to fill all squares on the board with coloured game pieces while scoring as many points as possible.

Each game piece with the exception of the very first one must be placed in a square adjacent to another piece, and only if their sides match in colour, which may be either red or yellow. Points are scored for each piece placed on the board, with more difficult moves yielding more points. The more adjacent pieces there are that must be matched in colour, the more points you will get.

There is also a number of "joker" pieces with at least one of their sides coloured in blue. The blue sides count as matches regardless of the adjacent pieces' colours.

Additionally, some squares known as "action fields" are marked with icons. Placing a piece in such a square will produce an additional effect, as described below:

If necessary, the player may reserve up to three pieces for future use instead of placing them immediately on the board, but moving them to the special slots to the right of the playing field. It is also possible to scroll the playing field by pressing the arrow keys or clicking on the edges of the board, which may produce more possibilities for placing the pieces, but at the cost of reduced bonus points.

Before the main game, there's an optional warm-up round with only 28 squares to fill.

Apart from the default rule set (Regel 1), there are several game variations. Rule set No. 2 allows to place pieces that do not match in colour, but at the penalty of reduced score awarded for that move. The Crazy Mode (activated by pressing the space bar twice at the start of a regular round) shows the positions of action squared but not what they actually are. Super-4 marks every second piece with a dot in the centre, and more points are awarded if one such piece is placed adjacent to four other marked pieces, with even more points if it is completely surrounded by eight other marked pieces. 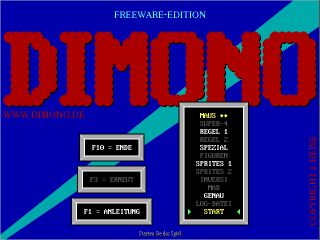