The young Callash has been just crowned the king of Gran Callahach. Twenty years ago the land was in grave peril, as the evil sorcerer Sanwe planned to conquer and ruin it. But he old king's court wizard Ner-Tom magically imprisoned Sanwe using the powers of the Dragonsphere spell. The sorcerer swore to avenge his humiliation once the spell's energy runs out. Now, this time has come, and the young hero must defeat Sanwe before he breaks free. As he approaches the sorcerer's prison, he is yet to realize that dealing with Sanwe will lead to startling realizations concerning his own self, and unravel a new sinister plot...

Dragonsphere is a graphic adventure in the classic third-person LucasArts and Sierra style, and the third adventure game by MicroProse, similar visually and gameplay-wise to Rex Nebular and the Cosmic Gender Bender. The interaction with the game world is performed by applying one of the ten different verb commands to objects and/or people. The game has vast amounts of unique text responses to player's actions and branching dialogue with characters. The puzzles are, for the most part, inventory-based. The game features hand-painted backgrounds and some digitized animation. 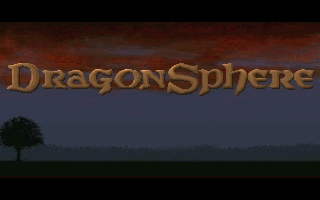