You can play Dungeon Crawl on this website so you don't need to download and install the game on your computer. We recommend to use Google Chrome when playing DOS games online.

Dungeon Crawl (or simply Crawl) is a roguelike game similar to NetHack, with many advanced features. The core game mechanic is the same as in Rogue, the grandfather of the genre: the player explores a huge dungeon with multiple levels and crawling with monsters, represented in a top-down view that utilises ANSI characters in lieu of graphics. The objective is to collect treasure and ultimately find the mysterious Orb of Zot, then get back out of the dungeon with this prize. Along the way, the player gets stronger by defeating foes and finds better equipment, learns spells and other skills, and so on.

Crawl offers an in-depth role-playing system, with a very big (compared even to many non-roguelike RPGs) selection of player classes and fantasy races where NetHack only has "archetypes" instead. The concept of religion that the player character follows, outlined in NetHack, is also deepened. The game implements a rather realistic line-of-sight in a circle around the player, with the explored areas that are currently out of range shown in a greyish tint. Some mechanics like shooting projectiles have also become more complex compared to NetHack as you may aim and shoot in any direction within a certain range.

Dungeon Crawl and its entire source code are free to use, distribute and modify. As such it has a native Windows version, including a release that adds graphical tiles. 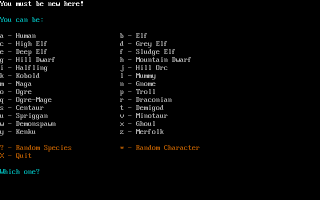