Fire and Ice: The Christmas Demo

You can play Fire and Ice: The Christmas Demo on this website so you don't need to download and install the game on your computer. We recommend to use Google Chrome when playing DOS games online.

This is a special Christmas-themed demo version of Fire and Ice, featuring the Cool Coyote. This time, the hero must travel to his in-laws for a Christmas dinner, but his kids scattered all presents and food he was supposed to bring all over the place. Moreover, local wildlife is running amok in festive fervour, making it even harder to collect the items back in time.

Gameplay is completely identical to regular Fire and Ice, but Coyote is wearing a Father Christmas outfit and is collecting presents. The enemies also have a slightly different appearance in this version.

This demo was originally released on the PC Format coverdisk that came with the January '94 issue of the magazine. It seems to have different levels compared to a similarly themed Christmas release for the Amiga, published by the Amiga Power magazine. 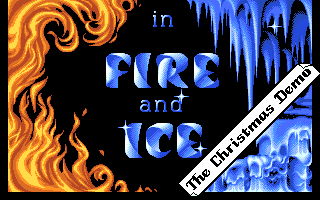