Four different "films", two in Europe and two in the desert, have been included for viewing. An interesting feature of this demo is the ability to switch a mission film to interactive mode and actually take over the flight of the helicopter.

Gunship 2000 is the first multi-copter simulation on the market. The original Gunship, a simulation of the AH-64A Apache attack helicopter, won several awards and sold well over 100,000 copies.

In Gunship 2000, gamers will be able to choose up to three types of helicopters (of the seven in the army's arsenal) and take up to five on any of hundreds of missions. Action will occur in the Persian Gulf and Central Europe and the player will designate the type of mission to pursue. Options will include training, single and multiple helicopter missions, and the campaign game, including a map showing the ebb and flow of battle. 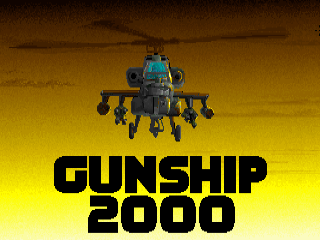