You can play Helicopter Mission on this website so you don't need to download and install the game on your computer. We recommend to use Google Chrome when playing DOS games online.

The helicopter can be controlled either by keyboard or joystick. Use the up arrow to accelerate, down arrow to decelerate or reverse, hold Alt + up or down arrows to change flying altitude and land/take off, and left/right arrows to turn the helicopter. Space bar is used to drop cargo, release parachute jumpers etc.

Helicopter Mission is a promotional game commissioned by German armed forces (Bundeswehr) to advertise military service in general, evoke the players' interest in the helicopter service, and educate them about the role of military in everyday life.

The game depicts day-to-day duties of a Bundeswehr helicopter pilot. Sporting an isometric perspective that is visually similar to the popular Desert Strike franchise, Helicopter Mission has no violence and combat but instead focusses on peaceful (but sometimes no less dramatic) search and rescue missions.

There is a total of seven missions (the first being a training mission but don't expect it to be easy!) with various objectives. Even though there is no combat involved in any of them, skill and learning are required to master any level. You'll need to watch such factors as wind direction, flying altitude and fuel levels.

The player is awarded points based on performance during each mission, and anyone who accumulated over 6,000 points by completing the entire game in one sitting was eligible to enter a contest run by Bundeswehr, with the prize being a tour of a helicopter facility with a short helicopter trip (the game itself keeps the prize secret but it was mentioned in a magazine advertisement). Any level can also be replayed separately by using a password that is shown upon its completion.

Helicopter Mission is entirely in German (except for the title), so some knowledge of the language is recommended to understand the briefings. For example, one of the missions is about transporting a person injured in a road accident to the nearby hospital, but first you need to pick the emergency doctor from that hospital. Current objectives are always shown in the bottom left corner of the HUD. It is also advised to study the level map shown during the briefing as you will not receive any directions to your objectives during the flight, and the minimap is otherwise not available.

At the start, the game asks several questions about the military, but there is no wrong answer as it will take the opportunity to educate the player whichever option is selected.

Helicopter Mission was distributed freely as a promotional product. German computer magazines published cut-out coupons that readers could send to get a free physical copy of the game that came on a floppy disk in hard case with a user manual. Digital copies were also distributed on magazine coverdisks and local BBSs. 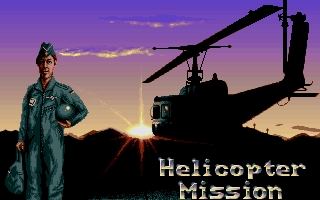