You can play Joerg's Flight-Sim on this website so you don't need to download and install the game on your computer. We recommend to use Google Chrome when playing DOS games online.

Regular DOSBox builds do not support the START.BAT file that is used to access individual missions. Please use either DOSBox-X, or launch each mission manually via 1.BAT to 5.BAT.

Joerg's Flight-Sim is one of the earliest user-made simulations created with Domark Software and Simis' Flight Sim Toolkit (FST). It's a simple game with five unrelated scenarios, all taking place on the same world map. In two of these, you'll sly a civilian airplane from one airport to another, and in one, it's a flight in a Sopwith Camel at an air show. Only two scenarios involve combat in an F-16 against enemy ground, naval and air targets.

Unlike later FST sims, this one does not support high-resolution SVGA modes, and even digitized sound effects are optional and come in a separate pack. The F-16 is rather unstable (as detailed out in the supplied readme file), so extreme caution is advised while flying it. 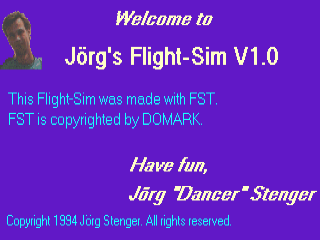