Revenge of the Mutant Camels

You can play Revenge of the Mutant Camels on this website so you don't need to download and install the game on your computer. We recommend to use Google Chrome when playing DOS games online.

NOTE: This game is liberated: originally sold as shareware, its full release version was made freeware on 8 February 1997.

In this game you control a camel that moves across the screen, shooting at a variety of creatures and objects that act as enemies. The objective is to stay alive as long as possible (preferably to the end of the level). An optional CPU sidekick and a two-player mode are available.

The game was originally written for Commodore 64 and ported to DOS in 1994. 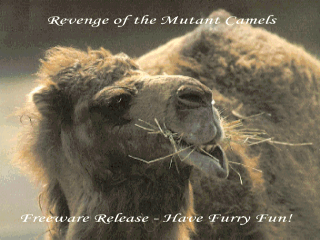