You can play Rol Crusaders on this website so you don't need to download and install the game on your computer. We recommend to use Google Chrome when playing DOS games online.

Use the arrow keys to move around, and the space bar to attack enemies (only the currently selected character will attack. The mouse can be only used to manipulate the menus, items will be picked up from the ground automatically, a la Wolfenstein 3-D.

Rol Crusaders is a first-person party-based dungeon crawler with freeform real-time movement and combat, similar to Hexx: Heresy of the Wizard. It weaves a rather grim tale of the fate of the Order of the Templar: driven to almost complete extinction by the Inquisition, the last remainders of the Order must stand against the corrupt and power-hungry Inquisition leader who seeks to find the Ark of the Covenant that had been safeguarded by the Templars during the Crusades.

The game plays very similar to Hexx: Heresy of the Wizard, as your party of four heroes explores levels and fights enemies in real time. The objective of each level is to reach the exit until time runs out. 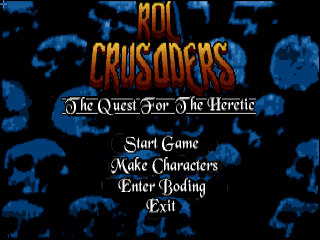