You can play Rollin on this website so you don't need to download and install the game on your computer. We recommend to use Google Chrome when playing DOS games online.

Rollin is an intricate arcade puzzle game for one or two players where you need to guide a ball through a complex maze filled with traps, monsters and other hazards. In addition to avoiding those, the player can also collect gold coins to purchase various useful items in shops that may be found in certain parts of a level. In many ways, gameplay is similar to an earlier commercial title, Rock 'n Roll.

Complicating matters is the fact that the ball's movement is modelled rather realistically, with variable speed, inertia and other effects, which urges the player to move very carefully. However, the first episode has a rather gentle learning curve, slowly introducing the various elements of the game, which are quite numerous!

Rollin was marketed as shareware, with only the first episode included in the unregistered "friendware" version. Four more episodes could be ordered in packs of two. Each episode contains eight levels. 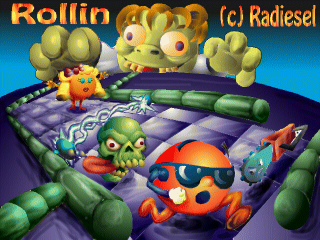