You can play Skyhawk Attack on this website so you don't need to download and install the game on your computer. We recommend to use Google Chrome when playing DOS games online.

Skyhawk Attack is another of Ron Walker's military flight simulators made with Domark Software's Flight Sim Toolkit (FST). This time, it's the 1960s, and you're a British Royal Air Force (RAF) pilot of a Douglas A-4 Skyhawk stationed at a base on a group of fictitious remote islands. There are fourteen scenarios which can be played in any order, with such objectives as scramble and repel and enemy air attack, find and destroy specific ground, naval or air targets, and escort or provide cover for friendly forces. Missions can take place during dawn, day or night, and start either on the runway or in mid-air.

Skyhawk Attack was released as freeware. It is highly advised to read the supplied electronic manual and familiarise oneself with game controls before playing. 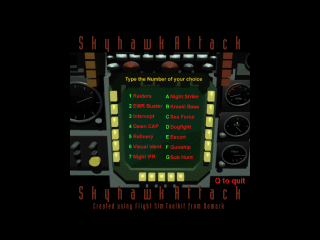