You can play StarFighter 3000 on this website so you don't need to download and install the game on your computer. We recommend to use Google Chrome when playing DOS games online.

To switch to high-resolution mode, pressF9 at any time during the game (not recommended if playing in browser). To exit mission, press F12.

StarFighter 3000 is a fully 3D rendered futuristic arcade-style flying shooter where the player pilots a fighter/interceptor type aircraft on various missions, somewhat similar to Terminal Velocity. The game was originally released for Acorn Archimedes as Star Fighter, then enhanced ports to other platforms were made, including the PC.

The playable demo includes two missions: a training level and a combat mission against ground targets in enemy territory.

The original Acorn Archimedes version has received several updates and is officially available as a free download (please see the links section below). 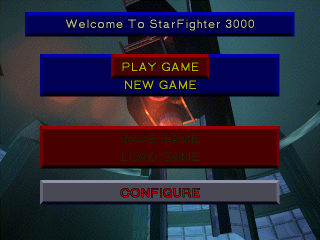