You can play Strike Base on this website so you don't need to download and install the game on your computer. We recommend to use Google Chrome when playing DOS games online.

Strike Base is a vehicular combat shooter with strategy elements somewhat similar to the classic Battlezone. In somewhat distant future, Mandkind expands beyond the Solar system and contacts various species of extraterrestrial intelligence, but some turn out to be hostile and unleash a full assault on human base Marcus V. Taking up the role of a military commander, the player must repel and destroy the attacking alien forces.

Each mission starts with a base that can simultaneously deploy up to four combat units, either armoured ground vehicles or aircraft (there may be more spare vehicles in the hangar, in case some get destroyed in the battle). Depending on the available arsenal, the player selects payload for each, and then may take control of any unit at any time, with the rest being controlled by setting waypoints on the mission map.

Driving and flying in Strike Base is rather similar to Terminal Velocity or Radix: Beyond the Void. Once movement speed is selected, the vehicle is controlled almost entirely by the mouse. You can optionally switch to the third-person "behind view" by pressing F6. The 3D terrain is rendered with voxels, like in Surface Tension or Lords of Midnight: The Citadel.

Missions vary by objectives that range from base defence to complete destruction of enemy forces, or protection or destruction of specific targets. A detailed briefing is presented before each mission. 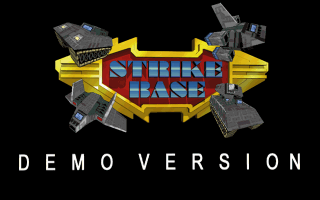