You can play Super ZZT on this website so you don't need to download and install the game on your computer. We recommend to use Google Chrome when playing DOS games online.

The game was released as freeware in 1997. To switch between episodes, press W in the main menu. 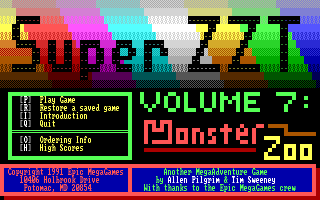