You can play The Dungeons of Kairn on this website so you don't need to download and install the game on your computer. We recommend to use Google Chrome when playing DOS games online.

The Dungeons of Kairn is a shareware fantasy role-playing game. The player controls a party of adventurers sent on the quest to save the kingdom from an evil mage. Before confronting him, the adventurers need to collect the three magical artifacts hidden away in deep dungeons.

Gameplay is fairly typical and involves roaming around the land, visiting various places like towns and dungeons, and fighting enemies that appear in random encounters. With each victory, the characters in the player's party gain experience and gold to grow stronger and buy better equipment. Combat is turn-based on a tactical map. The entire game is controlled with the keyboard, so it is advised to learn the keyboard shortcuts before playing (listed in the game manual).

The Dungeons of Kairn was sold as shareware by its author. The unregistered version includes only one dungeon out of four in the complete game, but is otherwise not limited in any way. 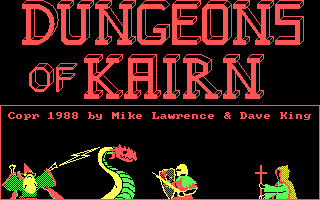