You can play The Machines on this website so you don't need to download and install the game on your computer. We recommend to use Google Chrome when playing DOS games online.

Press A to move up, Z to move down, X and C for left and right, Space bar to select. To quit the demo, press F10.

The Machines is a mixed-genre futuristic shooter game. The player designs, outfits and remotely controls a fighter robot, which is set to navigate mazes full of other, hostile fighter robots, as a kind of sport/competition between rival companies. Winning these matches earns the player money which is then used to upgrade the robot's systems and repairs, if necessary.

The management aspect in this game is more pronounced compared to simpler shooters that have an equipment shop between levels, as The Machines simulates many aspects of a futuristic company gambling its money on a violent robotic sport. The robot components can be covered by insurance if the player so chooses; there are various ways of obtaining new parts, as well as illegal information to the player's advantage.

The game was originally released for Amiga systems as Universal Warrior. The Machines is an improved conversion of the game to the PC. The playable demo contains three levels. 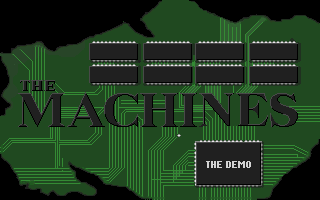