You can play Track Attack on this website so you don't need to download and install the game on your computer. We recommend to use Google Chrome when playing DOS games online.

When the race starts, the game is paused. Press P to unpause the race and play.

Track Attack is a rather obscure futuristic racing game rendered in true 3D, similar to Whiplash and Carmageddon. Its main distinguishing feature is the Dynamic Track System (DST) that allows for in-game, real-time changes to tracks that can give a racer an advantage, for example, by popping obstacles in front of their opponents.

The pre-release demo features one track and several cars, with the option to either drive solo in practice mode or race against three opponents. 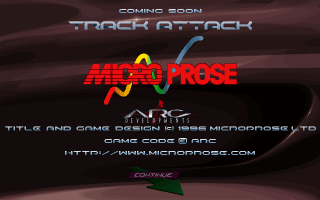