You can play Tronic on this website so you don't need to download and install the game on your computer. We recommend to use Google Chrome when playing DOS games online.

Tronic is a brick-breaking game partially based on an earlier TLK Games title, TecnoballZ, but more straightforward. Bricks have different levels of durability, usually indicated visually in some way, with many taking over two hits by the ball to break. Same goes for moving objects (one could say creatures but they have a distinct non-organic look; yet they make an "ouch" sound when hit by the ball) that appear and move randomly on the playing field.

Unlike TecnoballZ, there is no shop between levels, instead the player just collects any bonuses that fall out broken bricks or moving things, like in many other Breakout variants, from PopCorn to Krypton Egg.

Tronic was originally developed for DOS and marketed as shareware. Eventually TLK Games ported the game to Amiga AGA using code routines and graphics from TecnoballZ. This version is available as a free download from their website (please see the links section below). 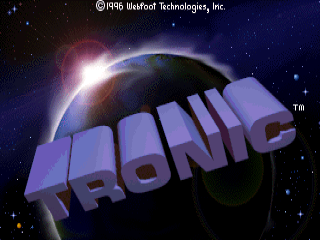