You can play 1939 on this website so you don't need to download and install the game on your computer. We recommend to use Google Chrome when playing DOS games online.

1939 is a turn-based wargame that covers the invasion of Poland at the start of World War II. You can control either the Polish Army or Wehrmacht forces across a dozen scenarios based on historical battles.

As a wargame, 1939 does not have particularly complex rules, but the controls are a bit clumsy and counter-intuitive. Even the main menu, which has several items, gives you no indication of where you currently are (you first select your side, then choose is you want to have sound effects and use the mouse), so you can only know that by pressing the arrow keys to see which options will change (press Enter to confirm each selection).

The game itself plays in a fairly standard way: issue orders to units, end turn to see part of the battle play out. However, it seems as if the interface was originally written for keyboard only, and mouse control was added as an afterthought. To order units around, you need to either drag the mouse to lay out the path for them, or use the arrow keys on the keyboard, which is more accurate and preferable.

You can press F1 to preview where your units will end up after carrying out the orders that you gave them. But to actually end the turn, you need to press Enter. At the start of a new turn you'll receive battle reports, which are viewed by pressing the R key, and cycling through them is done by pressing the plus and minus keys on the keyboard.

1939 is entirely in the Polish language. Only the first two scenarios are available in the demo version, and you can only play on the Polish side. There is no way to save or load your game during a battle, but you can exit a scenario at any time by pressing Ctrl+Q. 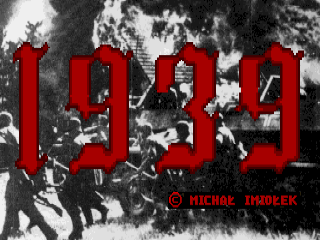