You can play 3-D Pitfall on this website so you don't need to download and install the game on your computer. We recommend to use Google Chrome when playing DOS games online.

3-D Pitfall is a Tetris variant that adds the third dimension to the game (without actually using 3D graphics). The well, viewed in a top-down perspective, is now filled with shapes made of cubes instead of 2D blocks, which may be rotated along three axis. These shapes vary from single cubes to various configurations of two or more cubes, with only some resembling the classic tetromino pieces from Tetris. Accordingly, instead of completing rows of blocks, the objective is to fill in layers of cubes for them to be removed from the well.

This 3D concept is not novel to 3-D Pitfall, as it was pioneered in an earlier commercial game from 1989 called Blockout.

3-D Pitfall was sold as shareware. The unregistered version is fully playable, but the registered game contains additional piece types (up to 80), including pieces that produce special effects called "bomber" and "melter". 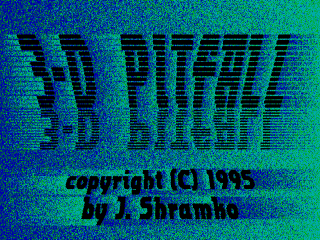