The suicidal superstars are back...
...and this time it's a giant leap into a new dimension - the third!

The best-selling Lemmings, whose games have sold millions of copies around the world, now feature in their most ambitious adventure yet; 3D Lemmings is published by Sony Interactive Entertainment for both the new PlayStation game console and PC CD-ROM.

The new game is as playable and addictive as Lemmings has always been, but this time the fully realized 3D environment creates a mind boggling twist to the challenge. While the aim of the game is guiding the Lemmings to safety - remains the same, 3D Lemmings requires the mastery of movement with a 3D world filled with traps, obstacles and mayhem.

3D Lemmings reinvents the tried-and-tested, award winning Lemmings format: it's now the most fiendish puzzle proposition in the history of gaming. 3D Lemmings will tease, torment and challenge every Lemmings and Doomster enthusiast. The best selling computer game of all time just got better! 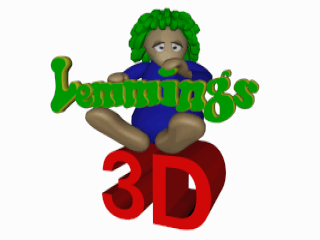