You can play Absolute Zero on this website so you don't need to download and install the game on your computer. We recommend to use Google Chrome when playing DOS games online.

In this sci-fi simulation game, you're a pilot defending the human colony on Europa, Jupiter's moon, which is under attack by hostile aliens. Fly missions against the enemy forces, and man defensive turrets to protect fellow humans from onslaught.

The playable demo includes two missions (one turret mission and one flying mission) out of 30 in the full game, complete with voiced-over missions briefings.

Absolute Zero was developed with an advanced version of Domark Software's Flight Sim Toolkit, a commercial flight simulator construction set that also became the basis of many community-created games. However, this version used by Absolute Zero added texture mapping and support for higher resolutions (800x600x256), which were not widely used in community-created simulators. 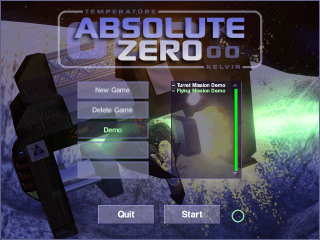