You can play Adventure Fun-Pak on this website so you don't need to download and install the game on your computer. We recommend to use Google Chrome when playing DOS games online.

Adventure Fun-Pak is a collection of 4 adventure games:

Night Bomber
Your mission is to destroy the enemy cities. All you have to do is enter the angles over which the missiles will be fired. Occasionally UFO's will fly over. They try to destroy either the city or your base. You cannot shoot them. The game ends when you have fired all twelve missiles.

Raiders of the Forbidden Mine
While treasure hunting you discover a huge shaft leading deep underground. Bloody marks on the walls warn you of a greedy ghost that haunts the abandoned mine. You can dig tunnels, but that takes longer than moving through the passageways. You have to collect the key before you can climb down the mine shaft to the next lower level. While collecting points you also must look out for the ghost, because one touch from him kills.

Rogue Runner
This game is a close relative of the better-known Kroz series. Searching for the Heart of Courage in the Ezam dungeons, the player must evade the lost souls of previous adventurers while strategically using the pick axes and teleport scrolls strewn about the place. The game's primary twist is that it takes place in a maze that is largely invisible. After a tantalizing glimpse of the whole area at the start of play, most of the maze disappears, with wall segments only reappearing when the player bumps into them. Pick axes can be used to cut through wall segments and teleport scrolls take the player to a random spot in the maze. While all this is going on, the lost souls relentlessly home in on the player, adding urgency to the proceedings.

The Thing
Inside a vast network of caves lies hundreds of valuable gold nuggets waiting to be found. But also awaiting the adventurer is the fearsome Wumpus, a cave creature no one has ever seen and lived to describe it. Your goal is to locate the Wumpus and shoot him with an arrow from a connecting cave. Do not enter the cave where the Wumpus is as he will kill you. There are also bats in the cave that will pick you up and dump you somewhere else, and bottomless pits that will also kill you. You can collect gold nuggets that will increase your score. 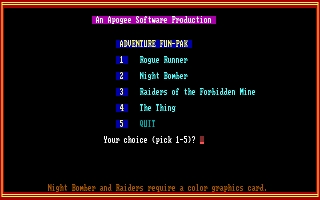