You can play Age of Rifles on this website so you don't need to download and install the game on your computer. We recommend to use Google Chrome when playing DOS games online.

Master the art of war in a world where the rifle is king! Age of Rifles puts you in command of troops from around the world, fighting the endless battles that raged between 1846 and 1905. Much more than a Civil War game, Age of Rifles includes the battles of Europe, Asia, and South America.

Every Major conflict is yours to control! Beautiful, painstakingly rendered units and icons and an original period soundtrack will convince you that you have returned to a time when the rifle ruled the land! 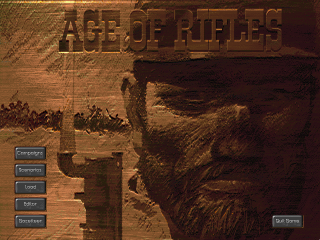