You can play AH-3 Thunderstrike on this website so you don't need to download and install the game on your computer. We recommend to use Google Chrome when playing DOS games online.

AH-3 Thunderstrike (known as Thunderhawk 2 in Europe) is a helicopter flight simulator with simplified, arcade-like controls and a heavy focus on action. In the near future, UN forces fight global threats using specialised task forces -- and you happen to be a top helicopter pilot in one of them! The game takes you on a tour through various hotspots across the globe, with missions ranging from convoy escort to full assault on entrenched enemy positions.

Before each mission, you can select armaments for your helicopter from a somewhat limited but efficient arsenal. In the absence of a joystick, the most efficient control method in the game is using a mouse, which is not at all usual for flight simulators and shows the game's leanings towards the first/third person shooter genre. You don't have to worry about fuel running out, or changing flight speed or altitude, as these aspects have been left out so that the player can jump right into action.

The demo, which was originally published on a PC Gamer coverdisk, includes two missions: recapture a town in Central America and fight pirates in the South China Seas. 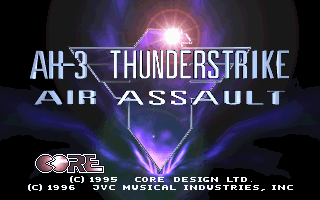