Aleshar: The World of Ice

You can play Aleshar: The World of Ice on this website so you don't need to download and install the game on your computer. We recommend to use Google Chrome when playing DOS games online.

Aleshar is an open-world fantasy role-playing game set in the magical world that is freezing in a permanent winter. Magic exists, but its use and knowledge is restricted by the Cult of Wisdom, which hunts magically gifted people to either indoctrinate into their own ranks, or eliminate as undesirables.

The player character is one such gifted young person, who had been hiding from the Cult, but is now on the run after being discovered by Cult agents. Alone in the snowy wilderness, the first objective is now to survive and hone your skills, depending on the selected class and perks.

Aleshar was originally sold as shareware, but in 2000 the developers released the full registered game into the public domain. 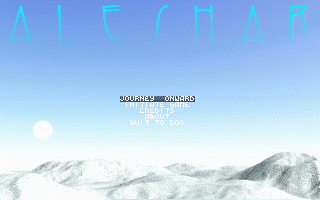