You can play Alien Breed on this website so you don't need to download and install the game on your computer. We recommend to use Google Chrome when playing DOS games online.

Use the arrow keys to move around, Right Shift to shoot, Ctrl to use the terminal, Space bar to pause game, Esc to quit level and F10 to exit to DOS.

The DOS version of the originally Amiga exclusive classic top-down shooter clearly inspired by the Alien franchise, but not developed under the Alien license. Two Federation marines are sent to a remote outpost that is not responding, only to find it overrun by hostile aliens. Now it's up to them (the game supports one and two player modes) to clear the facility of alien infestation and get out alive.

Gameplay is fairly straightforward: you shoot aliens while trying not to let them get close, and collect useful items that help you further on your quest. In addition to weapons and ammo, these include keycards (this is not DOOM and all doors are initially locked) and credits, which may be then spent on weapons, ammo and other useful items at terminals scattered across the levels.

The demo was originally published on a floppy that came with the December '93 issue of the PC Format (UK) magazine and features an exclusive level that is not part of the full game's campaign. 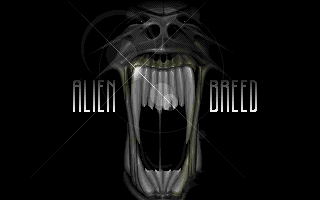