You can play Alien Carnage on this website so you don't need to download and install the game on your computer. We recommend to use Google Chrome when playing DOS games online.

This is a liberated game: it was originally shareware, but in May 2007 Apogee Software/3D Realms released the full version as freeware.

If Duke Nukem has a twin separated at birth, it's got to be the character of Halloween Harry! Harry has an armory of weapons he can find and use, besides the devastating flame thrower that he starts the game with. And Harry's jet pack takes him to spots on a level that normal heroes could not reach.

Earth is on the verge of a takeover by aliens intent on turning humans into mindless slave zombies, who can be used in their conquest of the universe. Harry's called into action to Space Station Liberty, and given orders to penetrate the alien ship which has burrowed itself under a high-rise city.

In addition to the flame thrower, Harry can use weapons dispensers he finds during the game, giving him weapons like the photon cannon, guided missiles, grenades, shields, micro nukes, and the very powerful Omega bomb. It's an arsenal that will have the aliens shakin' in their slimy shoes.

The following cheats work on version 1.1 of the game or higher:

Ctrl-R-E-N: Gives you all weapons, and activates god mode for several seconds.
Alt-L: Level warp. After pressing, type the number of the episode (1-4), then the number of the level (1-5). Incorrect input will crash the game!
Alt = Change location within a level. Type coordinates after this code. Incorrect input will crash the game! 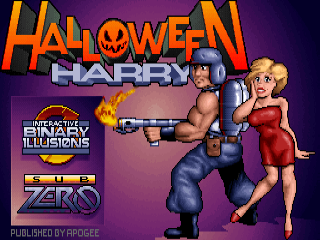