The shareware version includes one quest, Exiguus and the Undead, which is four levels long.

This is a liberated game: it was originally shareware, but in 2013 the authors generously released the full version as freeware. This updated release can be downloaded from the official website (please see the links section below).

Exiguus the Necromancer has turned his dark arts to the task of raising an army of the undead.

You have been chosen, as the Kings Hero, to stop this evil menace before the land falls to his dark arts.

With 2 years in the making, Amulets and Armor is a breakthrough fantasy adventure game by United Software Artists. With the thrill of first person shooter games and the involved intricacies of role playing simulations, you will be immersed in a large fantasy campaign that spans over 30 levels and 11 different character classes. Work alone or as a team with up to 4 human players over your local IPX network or modem. Download it and discover a whole new level of gaming! 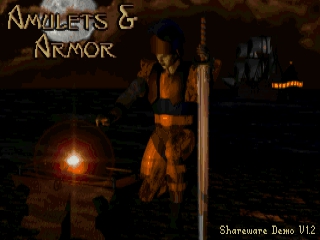