You can play Annihilator Tank on this website so you don't need to download and install the game on your computer. We recommend to use Google Chrome when playing DOS games online.

Control the tank's movement with the arrow keys, rotate the turret with the angle brackets (< and >) and shoot by pressing the Space bar.

Annihilator Tank is a simple, easy to play but challenging arcade tank shooter game. There is a vague military theme, and each scenario is broken down into "zones", with the sole objective in each being the complete destruction of all enemy tanks.

The game world is rendered in full 3D, but with very minimalistic detail: there are occasional trees, houses, and later, enemy fortifications, but the rest is a plain square of flat ground. But really, little more is needed for gameplay as you'll hardly have the time to admire the scenery, being chased by and fired upon by the numerically superior enemy.

The key to successfully beating each level is to constantly keep on the move, utilising the tank's ability to move and fire in different directions thanks to the rotating turret. Charging enemy tanks straight on is both useless and inefficient, so keep your distance and strafe the enemy from afar. The only important thing to watch out for are the borders of the zone, as they will block the path, and slowing down for reverse or turn makes your tank a much better target for the trigger-happy adversary.

There is no limit to ammo supply, but likewise no powerups to restore the player tank's armour or the like. If the tank is destroyed, the game offers to retry the level, and game can be saved after beating a level. Zones get progressively harder, with more tanks, fortifications, and more aggressive enemy behaviour.

Annihilator Tank was sold as shareware and on compilation CDs, with only the first scenario being available in the unregistered version. The full game came with two more scenarios with a total of 24 zones, and the "Combat Unlimited" option that would spawn endless waves of enemy tanks, with the objective being to survive for as long as possible. 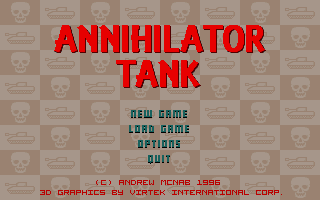