IMPORTANT NOTE: This game can only be played in the latest SVN builds of DOSBox, please see the links section below for download.

Antagony is a somewhat obscure versus fighting game with digitized character sprites, similar to Mortal Kombat titles, and just as violent. Neither the game itself nor the manual goes into particular detail about the plot, but apparently some kind of martial arts tournament is taking place, in which seven warriors take part, each with their own unique powers and skills.

The game has the usual single-player mode against AI opponents, human versus human mode (on a single computer), and tournament mode for up to eight players including a possible AI opponent, with players taking turns against each other on the same computer. Unlike many other games of the genre, each fight lasts only for one round, and can end very quickly if a fighter uses a deadly special move. For tournament mode, there is an option to link the fighters' health bars, so that if one player takes damage, the other's health is increased proportionally. 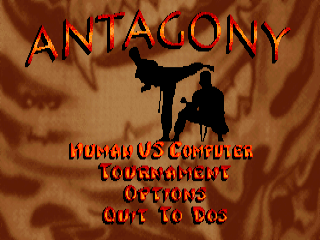