You can play Arcade Volleyball on this website so you don't need to download and install the game on your computer. We recommend to use Google Chrome when playing DOS games online.

Arcade Volleyball is a very simple volleyball simulation for one or two players. The objective is to not let the ball touch the ground on your side of the screen while trying to send the ball to the opponent so that they will not be able to bounce it back.

The game was originally developed for Commodore 64 computers, where it featured two player characters per team, but still each team was controlled by one player. The later Amiga port reduced this to two characters only, one per player, similar to the IBM PC version.

Author Rhett Anderson released this game into the public domain. 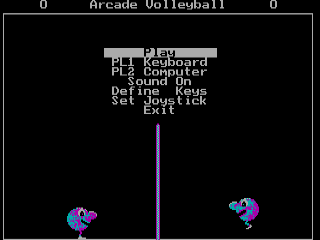