You can play Arctic Adventure on this website so you don't need to download and install the game on your computer. We recommend to use Google Chrome when playing DOS games online.

This is a liberated game: it was originally shareware, but on 20 March 2009 Apogee Software/3D Realms released the full version as freeware under the Arctic Adventure Freeware License.

Six months after the events of Pharaoh's Tomb, the young assistant-turned-treasure hunter Nevada Smith yearns for another discovery. Not willing to take his previous exploits as "beginner's luck" as accused by so called experts, Nevada has been determined to find another great prize to find.

One night while scouring old tomes in the university's library, Nevada finds mention of a band of Vikings who, after a large looting raid, had hidden their ship-full of ancient treasures somewhere in an Arctic cave. Being distrustful of each other, the band of Vikings, tore up the map that lead to the cave into four pieces and hid them as well. Only by putting the map together again would they be able to return to their treasure but as fate would have it after hiding their loot and map pieces the Vikings hit a powerful storm on their venture back and were lost at sea taking with them their secrets.

Deciding that he must go in search of this treasure our determined hero asks his old professor Dr. Jones to assist him on his quest. Dr. Jones, though flattered, turns down Nevada due to his large workload but not before tossing Nevada a little parting gift to help him on his quest. There, inside a wrap of cloth if Dr. Jones' trusty old .38 caliber revolver. After running back to his apartment and quickly packing Nevada hitches a ride on an Arctic bound freighter to start his Arctic Adventure.

In this sequel to Pharaoh's Tomb, players again control Nevada Smith. As opposed to the first game the player this time around starts out on a map of caves. Some caves need keys to unlock them while others are accessible only by finding a boat first. In this way the player has some choice over which level they'd like to tackle first. Control-wise Nevada can walk side to side, jump and shoot a gun, for which ammo must be collected on levels. Pick-axes must also be collected to break blocks of ice in your path. Along your journey the player will run into multitudes of enemies from, Yeti to penguins which can be either avoided since they are restricted to moving in strict patterns or dispatched with your revolver. There are of course traps abound in the caves and most will be found too late by players. Natural hazards and obstacles such as spike pits, rolling boulders, and piercing icicles are another thing to be on the watch for. Lastly another introduction in this sequel is the presence of icy cave floors. Players must judge their movements carefully to control themselves and predict the predicament they may find themselves in by stepping on to the ice covered platforms.

The entire game is split into four volumes comprised of twenty levels each with the first volume being the shareware version of the game. The volumes are simply titled Vol.1, Vol.2, Vol.3 and Vol.4. Keys and special items must be collected before advancing on to locked levels. The players have five lives but a save mode is available allowing the players to prolong their adventure. Saves can be made on the map screen and cannot be made while part-way through a level. A high-score table is available from the main menu displaying the top five scores.

[M] [F] [X] - Pressing all three of these keys at the same time will give you all the keys, the boat, infinite ammo, and infinite pick axes. This will work with either the shareware or registered version of the game. 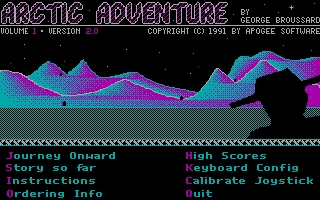