Azalta: The Cult of the Raven

You can play Azalta: The Cult of the Raven on this website so you don't need to download and install the game on your computer. We recommend to use Google Chrome when playing DOS games online.

Azalta is a party-based fantasy role-playing game with modular scenarios that more or less closely follows the look and feel of the classic Ultima RPGs. The player's party consists of four adventurers, with a variety of many possible race and class combinations, which travel as a group on the world map, but are controlled individually in towns, dungeons and combat encounters. This means that different parts of a location may be explored by different characters, a feature not found in many other, similar games.

The game does not come with a pre-set character party, but character creation is rather simple: you select the race, class and gender of each character, and give them a name.

Azalta was sold as shareware. The unregistered version contains one adventure, The Cult of the Raven, with more modules in the full version called Azalta Traveller. Users could also order the Creator package which allowed to design their own scenarios, as well as the complete source code of the game. 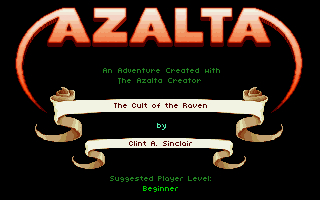