It's now five years since Desert Storm, and Saddam Hussein is still in power! Saddam continues to harass and jail innocent people from around the world. Saddam has rebuilt his army back to pre-Desert Storm levels. Once again he has taken over Kuwait and is threatening to strike south.

You are going Back To Baghdad(tm) to finish the war that George Bush prematurely stopped. You're the flight leader of an F-16C Block 50 with all the armament needed to get the job done.

The flight model is completely accurate except for the "G" forces of the real plane. All the aircraft 6 DOF (degrees of freedom) equations of motion are accurate. Your adversaries tactics are those used in training US Military pilots. ThrustMaster® F-16 FLCS(tm) and TQS(tm), as well as CH Products F-16 Combat Stick(tm), F-16 Fighter Stick(tm), CH Throttle(tm) and CH Pro Throttle(tm) models, are not only the best sticks and throttles but are duplicates of the stick and throttle found in the F-16, giving you the feel of the real aircraft while in flight. Every button and switch found on the stick and the throttle are active and allow you to use most if not all of the functions in the simulation. Your on board weapons and your enemy's weapons all behave like the real thing, and much of the work used to create the flight characteristics and seekers in these weapon systems is fashioned from the real weapon systems employed by both sides! Both AIM-9M-7 and AIM-120A AMRAAM are included in your stores list.

The Iraqi Terrain is fully photo-textured at 640 x 480 resolution, 3D and geo-specifically accurate with mountains, rivers, cities, and buildings located where they really are in the world. In fact, we have incorporated photographs provided by the US Defense Department taken during Desert Storm for building our 3D world. We even have Saddam Hussein's multi-million dollar summer palace in Tikrit that you can explore with your M-61-A1 Gun, Maverick Missile, HARM missile, Fuel Air Explosive or even, yes, a B-61 Tactical Nuclear Device. In order to add a level of realism not found in any military flight simulation game to date, we added Satellite Imagery from Spot Image Corporation. This is circa 1990 data and is the very same photo images that General Schwarzkopf used to bomb targets in Iraq and Kuwait during the war. The United States Defense Mapping Agency produced the charts of the area which are the same charts the military used. Many of the missions you will fly are historically correct missions over Kuwait, Basrah, Baghdad, Tikrit, H2 Airfield, and Nasiriyah.

Finally we have incorporated the most accurate radar (without revealing classified data of course) for the Westinghouse APG68 RADAR. You will have to learn to use the systems on this F-16C Block 50 and it will not be easy but the pay off and power is awesome! This is as much a real simulation as it is a game. Don't be fooled by other games on the market claiming realism, they are not ... this one is. Never before has any computer simulation available for the public offered so much realism and such attention to detail found in Back To Baghdad(tm). 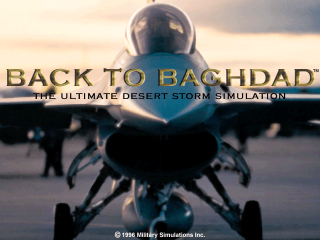