This is a liberated game: it was originally shareware, but eventually Sanctuary Software Studio released the full version as freeware.

BACKLASH is a 3D science fiction action game for DOS. The player must defend the mothership from over a series of missions against an increasing onslaught of enemy spacecraft, mine fields, asteroids and drones. The rewards from successful missions can be used to upgrade the defense systems and purchase more powerful weapons. 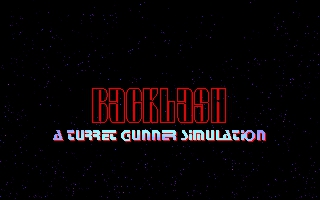