You can play Baller! And Forget on this website so you don't need to download and install the game on your computer. We recommend to use Google Chrome when playing DOS games online.

Baller! And Forget is a vertical-scrolling shoot-'em-up somewhat similar to Tyrian. There are waves of enemies and many ground targets, destroying which adds credits to the player's account, to be spent between levels in a shop to buy weapon, shield and equipment upgrades. The two-player mode omits the shop part and has the players just pick whatever bonuses fall out of destroyed enemies.

The game is entirely in German but knowledge of the language is not required to play. The story is about a conflict in space where the player acts for the invading side. All in-game objects, terrain and effects like projectiles and explosions are lovingly drawn in a pixel art style that is only slightly below that of Tyrian in artistic merit, while mission briefing screens make use of pre-rendered 3D objects.

The game was coded and pixelled by one man, Holger Wagner, and sold as shareware. The unregistered version has several levels from the full campaign, one of which may be accessed if you load the included saved game. 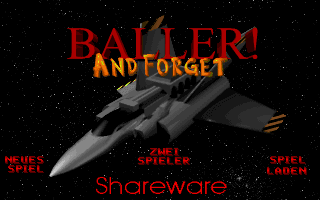