You can play Battle Bugs on this website so you don't need to download and install the game on your computer. We recommend to use Google Chrome when playing DOS games online.

The alluring odour of last week's pizza lies heavy in the air. Antennae strain and agony etches lines of pain into the faces of the cockroaches. With monumental effort, these warriors raise the flag above the carnage in the pepperoni.

This is Battle Bugs. A game of military strategy where insect troops rage across tabletops and storm junk food targets. Standing in their way are legions of enemy troops, armed to the teeth. You - and your battle strategy must guide your troops to glory. Will your armada of spiders cross the cola lake in time to save the flag? Will the suicide run of a kamikazee mosquito take out the praying mantis? At what price will victory be achieved?

Each level starts with a tongue-in-cheek battle scene showing your troops lined up against the enemy troops. Early levels are ''boot camp'' tutorials. Later levels progress from easy to very difficult. Become ''Napoleant'' of the insect world to take on the hardest levels. There are 22 different bug types and the levels on which the battle take place are constructed from 6 separate sets (Worlds).

The objective in each level is to defeat all the enemy bugs or to conquer the food objective. All levels have a time limit in which the puzzle must be solved. After each level you will have the option of inspecting the battlefield or depending upon whether you won or not, moving onward or repeating the battle. After a level is won, you will be rewarded with a victory celebration. Continue to win battles and you will be honoured by Queen Elizabug herself! 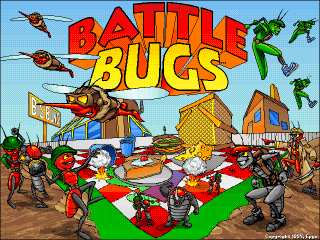