Titan Net is back! After years of conflict and ever newly emerging hope, the inconceivable seems to be about to come true.

Titan Net is regathering its strength and preparing a devastating blow against the Drullian civilization. Armies gather, iron phalanxes collide against one another, the great battle can no longer be averted - and this time the victory will be final...

Accept the challenge of Battle Isle 2200 and battle against the terror of the robot empire of Titan Net and against the treachery against the Drullian folk from within its innermost circles.

Battle Isle 2200 offers up to 400 units displayed simultaneously (55 new and different tanks, ships and aircraft) with all units in two different kinds of 3-D presentation (Raytracing and vector graphic), a stunning attack mode performed in extremely rapid vector graphic and several thousand landscape modules. Buildings, streets and railroads can be built on the maps.

There is also a weather simulation. A complete background story with animated sequences leads you through the story. Battle Isle 2200 can be played by up to 7 players. 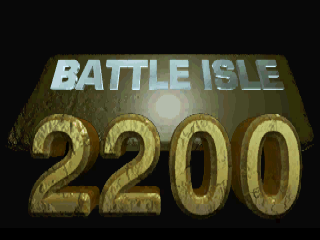