You can play BC Racers on this website so you don't need to download and install the game on your computer. We recommend to use Google Chrome when playing DOS games online.

It's pre-hysterical! Millionaire playboy caveman Millstone Rockafella arranges a wild n' wacky BC bike race and the winner receives the ULTIMATE BOULDERDASH BIKE. Cool n' crazy CLIFF ACE has had his sunglasses set on a Boulderdash Bike since he was knee-high, so he signs up for the race - taking his cave-babe ROXY along for the ride! But he faces some rock-hard competition in the form of Sid Viscous, Granite Jackstone and several other fast n' fierce opponents! 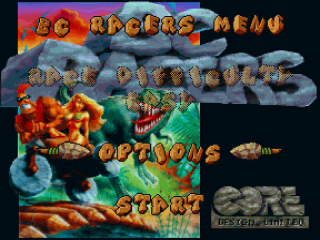