You can play Berlin 1955 on this website so you don't need to download and install the game on your computer. We recommend to use Google Chrome when playing DOS games online.

Berlin 1955 is a combat flight simulator that was created with Domark Software's Flight Sim Toolkit. It explores an alternate history scenario where Soviet forces invade Germany in 1955, and NATO members try to push them back. The player acts as a NATO pilot who is sent on various assignments, with F-84 Thunderjet and F-86 Sabre as playable aircraft.

Berlin 1955 was marketed as shareware. The unregistered version includes three missions out of ten in the full game. 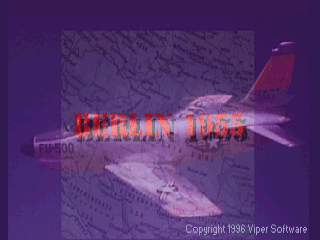