You can play Beyond the Abyss on this website so you don't need to download and install the game on your computer. We recommend to use Google Chrome when playing DOS games online.

Beyond the Abyss is a Gauntlet-style overhead view arcade shooter/maze game with a medieval theme. Navigate mazes full of monsters, collect treasure, keys to unlock doors and potions to heal inevitable damage. The protagonist looks like a knight in plate armour with shield and sword, but the only available attack is a small fireball-like projectile with infinite ammo. The monster bestiary includes ghosts, zombies, some kind of flaming or lava elemental things, but they all work the same, damaging the player on contact and occasionally firing a projectile of their own.

The graphics in Beyond the Abyss are fairly decent, but the controls are clunky, which is detrimental to fast-paced gameplay. There is no way to dodge enemy fire as you can only walk and turn, and you'll frequently find it a problem to align yourself with the enemies to hit them, and often get stuck in walls. Monster AI is primitive as well, and their movements appear tethered to those of the player. As a result, it is possible to lure monsters into a position where they'll block your passage while being covered by the same wall from the player's fire, soft-locking further progress.

Beyond the Abyss was distributed as shareware, with the free demo showcasing three levels out of 18 in the full game. 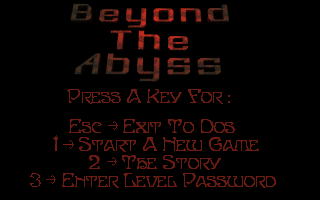