Billy the Kid Returns is the story of Billy the Kid, the infamous criminal from the late 19th century. You'll have the chance to play through several crucial moments in his life (and a few made up ones) in hopes of improving upon the Kid's own adventures.

The game features ten levels, which range from the Kid's escape from jail, a search for hidden treasure, an ambush by the Apache, a fight against some deadly Senoritas, and his final confrontation against sheriff Pat Garrett.

The game has side scrolling, platforming and top-down view stages. At the beginning, you must avoid soldiers and guard dogs, but in later stages you must evade wild animals, other rustlers, gunmen who're after your head for bounty, and snipers hidden in buildings.

You only have one way to defend yourself: your gun, which you can use to kill nearly every enemy in the game. You can also pick up other items like apples, stars or tools to raise your score. Picking up cooked meat raises your available lives by one. 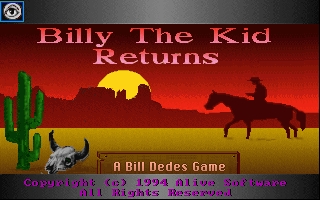