The file brdldemo.zip is an older demo version which is for both DOS and Windows. A newer Windows-only demo is contained in brdemo1.zip.

Somewhere across space and time is a world where the struggle for power is a way of life. A hundred rulers fight for control of great nations, and their armies trample meadows and croplands as they march into battle. Evil wizards conjure up legions of undead soldiers. High priests call their faithful to seize arms. Merchant princes plot against rival trading guilds. Thieves, assassins, and spies fill every court.

This is the world of Birthright™... where armies roar and collide in brutal combat, hungry princes scheme to seize power, and wizards secretly plot the conquest of empires. Here, rulers lead their kingdoms to greatness across the continent of Cerilia. Each ruler hopes to unite the lands under his own rule, and end the ceaseless struggle for power that has gone on since the old Anuirean empire fell, 500 years before.

You are the leader of your own kingdom and domain and it is you who has the power to wage war or preserve peace. At a single command, armies march and kingdoms fall. Thus, the Birthright™ game is a mixture of strategic war gaming and role-playing. With the blood abilities of a born king, you command heroes, wizards, and mighty armies. And, yet, will it be enough?

Explore the exciting world of Birthright™. Meet new races and characters and fight alongside old comrades. Learn to rule by virtue of your class and Birthright™. 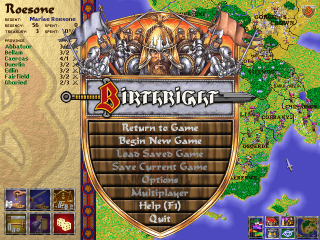