You can play Blackthorne on this website so you don't need to download and install the game on your computer. We recommend to use Google Chrome when playing DOS games online.

This is a liberated game: it was originally commercial, but in 2013 Blizzard Entertainment released the full version as freeware.

A visually stunning excursion into a nightmare world where quick thinking is second only to a quick trigger finger. From the creators of The Lost Vikings comes an epic test of puzzle-solving, quick thinking and even quicker reflexes.

Described as 'Prince of Persia with an attitude' and 'more intense than Flashback', Blackthorne challenges players to run, jump, blast, and think their way through intense logic puzzles to the ultimate showdown between good and evil as Kyle Blackthorne battles to save his home world.

An action experience with an attitude and the quality to back it up. Graphically stunning with outstanding game play and a careful balance of action strategy, Blackthorne is the dark side of the best-selling Prince of Persia. Brooding, dark and often violent, Blackthorne targets players with a world and story that are more than trite rehashings of the same old thing. 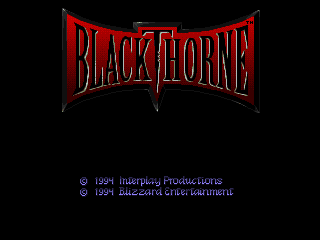