You can play Bloodsport on this website so you don't need to download and install the game on your computer. We recommend to use Google Chrome when playing DOS games online.

There are three different stages to be chosen from: Uchi-Komi is a training session in the dojo where the player can practice various moves. Randori is a one-on-one fight in a picturesque Japanese forest. And Kumite is a tournament against highly skilled opponents - much harder than Randori.

Bloodsport offers four playable characters with their own unique moves, but only the first one is available for actual fights in the shareware version. Moves are executed by pressing the numeric pad keys, either alone or while holding Shift or Ctrl. 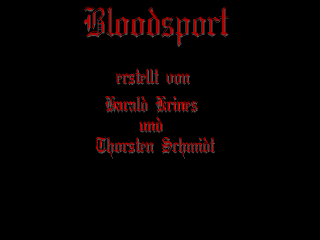